The teachings of Abraham.

I’ve only just gotten my new tattoo and people keep asking me ”why would you get a Ouija board they are so creepy?”. Let me explain, there is nothing scary about the meaning of my tattoo, quite the opposite in fact.

We’ve all heard of ‘the secret’ right? My personal opinion on this book is that although the message is true, the book was very commercialized. I never really enjoyed the book, too many boring examples of how the law of attraction has worked for other people and not deep enough for such an important and spiritual message.

The teachings of Abraham.

A gentleman called Jerry Hicks found a Ouija board and upon using it he was contacted by a group of non physical entities called Abraham. They used the name Abraham as this is a familiar name to us for a teacher or messenger. They described themselves to Jerry as an infinite intelligence, a group of consciousness from the non-physical dimension.

They spoke through Jerry’s wife Esther to him and answered many questions and passed on many messages and teachings to Jerry relating to the law of attraction.

Jerry & Esther began to pass on Abrahams teachings to us in 1986, in a series of books and seminars.

Abraham talks about the law of attraction, manifestation, how we are vibrational beings, how our emotions are our directional compass in life, and how to tap in to the universal stream of consciousness, among many other things.

What was interesting for me when i first was introduced by a friend to the teachings of Abraham, and then further back again when i was first introduced to The Secret – was that a lot of these mindfulness practices and law of attraction practices were already inherently a massive part of my day to day life. Without having any prior knowledge of any of these books or teachings i already used these practices every day. And had done so for many years. To hear these teachings was like a reaffirmation from the universe that i was right, i was receiving guidance from my soul and if i asked it would be given EVERY TIME. I already knew the teachings were true because i had already experienced them for myself!

Because these practices have had such a massive impact on my life over the passed few years I truly think everybody should read the books. The best book to start with i’d say would be ‘Jerry & Esther Hicks – The Law of Attraction’. If you are not into reading i have attached a link for the youtube video for the audiobook. The video link is for the full book so is on for quite a while but even if you listened to 10 minutes a day until your finished i promise you won’t regret it. Even if you don’t believe in spirits, or ouija boards, or universal consciousness – what have you got to lose by having a listen and giving it a try?

You have nothing to lose but everything to gain.

After reading the books or listening to the tapes, do your own research on the subject, what you will find will surprise you. From all over the world the law of attraction has been brought forth in many cultures over the years in many different situations. There are other writings describing this same ‘phenomena’. Whats beautiful is that the more the message is spread the more people can discover the power they have within them to change their own lives. To CREATE the life they always dreamed of.

There is enough abundance in our universe for us all to have what we want, for us all to make it. We rise by lifting others. Good luck, i hope you get everything you ask for! 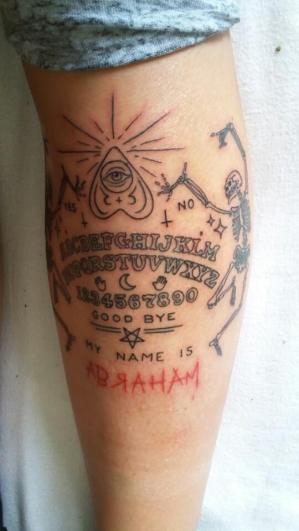